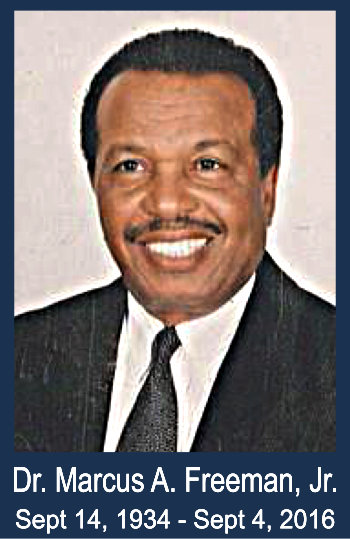 of Dallas, Texas, died September 4, 2016, at home. He was born September 14, 1934, in Smithville, Texas, to Pastor Marcus Antonio Lucas Freeman and Willie B. Wilburn Freeman. Marcus was a member of St. Paul United Methodist Church in Dallas, Texas, under the leadership of Pastor Richie Butler. He graduated from Wheatley High School in San Antonio, Texas. Marcus proudly served his country in the United States Army. He continued his education at Prairie View A&M University in Prairie View, Texas, graduating with a master’s degree. In 1972, he earned a Doctorate of Education at East Texas State, now Texas A&M University – Commerce. Dr. Freeman retired from the Dallas Independent School District as an administrator. He was an avid tennis player and instructor, and he received the USTA Youth Tennis Program Award in 2013, was inducted into the Black Tennis Hall of Fame in 2015, and received the Tennis Award by the City of Plano in 2016. He was active in the Freeman Junior Tennis Program and CYD Program; also he was publisher of BT Magazine. Marcus is preceded in death by his parents; brother, Edward Freeman; and sister, Willie B. Jefferson. He is survived by his wife of 43 years, Jacquelyn Smith Freeman, and their son, Vijay Freeman; son, Marcus Antonio Freeman III, and daughter, Carol Freeman, from his previous marriage to Ada Freeman (deceased); two grandchildren, Tommie Lee Robinson and Candelara Freeman; and a host of other relatives and friends.